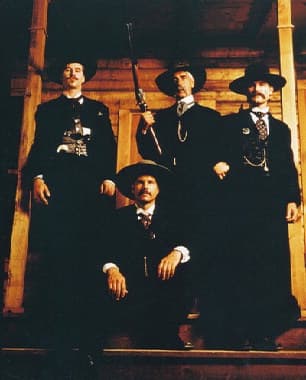 ~ ~ Two hard workers instrumental in making this a success! Miguel Corona has been contacting the Cast/Crew to be involved. Miguel is a producer for Southwest Pistolero Productions. The other is Gordon Anderson, who owns the Larian Motel – a great place to stay on Fremont St. He’s been organizing & gathering financial support.

~ ~ I had the opportunity to speak with the wife of a cast member of the 1993 Tombstone movie. My interview with her is below. 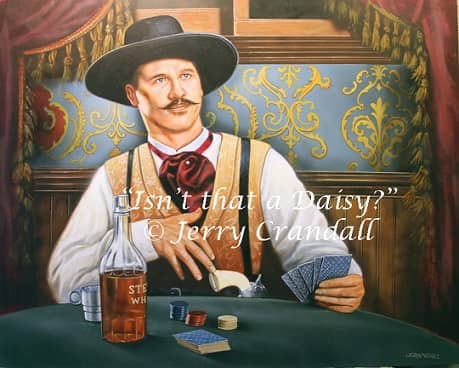 ©”ISN’T THAT A DAISY” BY ARTIST JERRY CRANDALL

~ ~ Karen} Hello Judy, I understand you’re Jerry’s publicist & of course his wife! I think you both used to live in Arizona?

~ ~ Judy} Yes, we lived in Sedona Arizona for over 15 years in the 1980s & 1990s. Jerry was a Buckaroo for the Tombstone movie, but he’s also a traditional Western Artist. When in Sedona, he participated in art shows, galleries & had several private commissions. Jerry’s been painting his beloved West for over 50 years.

~ ~ Karen} So you’ve now moved to Montana & have your business there?

~ ~ Judy} Yes. In 1997 we moved to the Hamilton Montana area. There we’re able to continue studying the old West, its history. Our Company Eagle Editions Ltd. is located near the awe-inspiring Bitterroot mountains in the Western part of the state.

~ ~ Karen} I understand you’re a bit into the arts too?

~ ~ Judy} Well I’ve been a director for several galleries & have penned quite a few publication articles about artists, history & collecting, plus a book “Cowgirls” – in its 2nd Edition. It’s published by Schiffer Publishing in Pennsylvania. 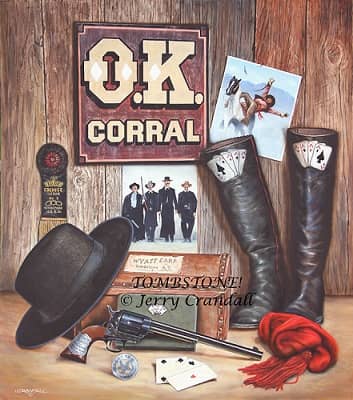 ~ ~ Karen} How did Jerry get into the film industry?

~ ~ Judy} Jerry was born in La Junta, Colorado, near Bent’s Fort on the Santa Fe Trail. He grew up with this Western interest. He began collecting artifacts, period photos, clothing, holsters, saddles, etc. As an avid collector, he also became an intense historian.

~ ~ Karen} That really did take passion for the subject!

~ ~ Judy} Yes, & because of his expertise on the American West, he served as Historical Consultant for early segments of the TV series “Centennial” & for the Charlton Heston Movie, “The Mountain Men.” He’s served as actor & consultant for various shows on the A&E Network, Discovery & The History Channel. Articles about Jerry have appeared in Southwest Art, Art Voices South, True West, Cowboys & Indians, Man at Arms, Prints, Air Classics Distinctly Montana & many more. 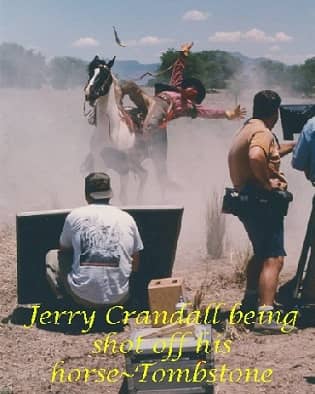 ~ ~ Karen} What’s the story on Jerry’s appearance in the film Tombstone?

~ ~ Judy} Jerry was given the role as “Cowboy Number 2” or the 2nd Cowboy in the script. But he also does some stunt work & his own stunts. He was working as cowboy #2 on the second unit with Terry Leonard stunt Coordinator, & director of the second unit when Jerry did his stunt falling off his horse, Apache. He broke his shoulder! So he couldn’t continue as that cowboy.

~ ~ Judy} Unfortunately, Jerry couldn’t stay on at all after he broke his shoulder. He came home to re-cover.

~ ~ Karen} That’s too bad! About that accident. But, he sure has diverse talents!

~ ~ Judy} Yes, in fact he was also an uncredited stunt actor on Tombstone. He is a SAG member – the Screen Actors Guild. 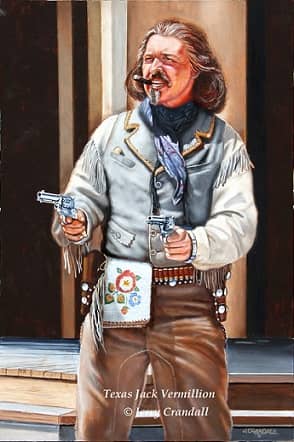 “TEXAS JACK VERMILLION” ©
AS PLAYED BY PETER SHERAYKO IN “TOMBSTONE”

~ ~ Karen} What will you & Jerry be doing at the Anniversary/Reunion?

~ ~ Judy} We’ll have original paintings, prints, posters & Giclée editions of the Tombstone film stars. The Buckaroos will be in the City Park June 30 & July 1. Visitors can drop by, meet Jerry – the artist, & view and/or purchase his amazing artwork.

~ ~ Judy} Yes. Of special note is the original oil of Peter Sherayko as Texas Jack Vermillion in the movie. Available are limited editions of only 35 autographed prints, each signed by both Peter Sherayko & artist Jerry Crandall. 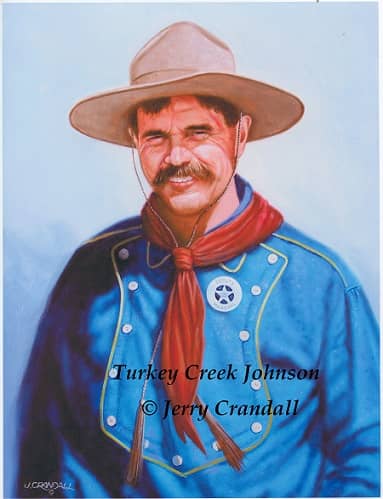 ~ ~ Judy} We’ll also have Jerry’s “Ed Bailey” as played by Frank Stallone. We’ll be offering a signed print edition of Frank’s piece as well! In addition we’ll have several Giclée editions available of the featured Tombstone pieces. And we’ll some smaller posters for only $20 to $25 so folks can have these and the stars’ signatures. Pretty cool, huh?!

~ ~ Karen} Absolutely! I know I’ve read that more than 50 of Jerry’s Western & Aviation Art paintings have been reproduced in limited edition collector prints & Giclée editions. I hear quite a few are now sold out & getting collector secondary market prices. Judy, I appreciate you speaking with me today.

~ ~ Judy} Thanks so much for letting your readers have a glimpse of Jerry’s work! 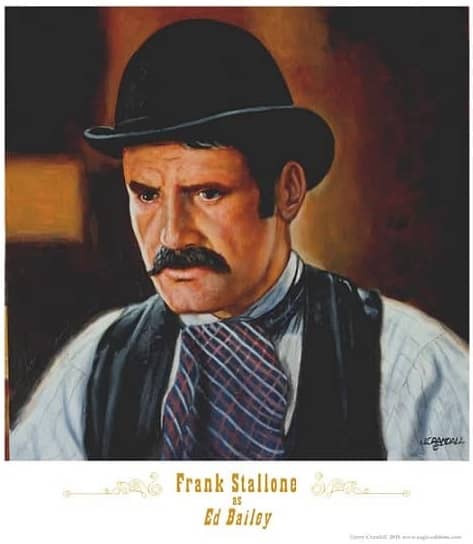 BY THE ARTIST JERRY CRANDALL ©

~ ~ We were happy to get to speak with Judy Crandall. You’ll notice Jerry’s style combines a union between historical authenticity & fine art. Working as a professional artist for over 50 years, he enjoys painting in a more traditional realistic style.

We hope we’ll see you in town, getting to our events & activities. Let us know if you’ll be going to the 25th Anniversary! Tell us how you like Jerry’s art. Just reply to this newsletter for easy input! (Let us know if we can use your comments – credit with just a first name & last initial; or only initials; or anonymous.)