Pictured during signing; Steinhoff, Fährmann (wingman to Steinhoff) and Schuck

Pictured below, Jerry Crandall with Buchner: 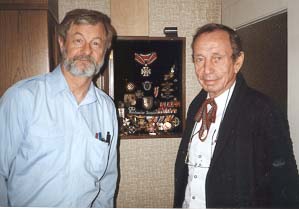 The AP denotes Artist’s Proof, from the private collection of the artist. These are the first 50 – 100 prints off the press once the artist has approved the color. As a result, these are highly collectible editions and cost a bit more than the limited edition signed and numbered editions.

Limited edition of 950 signed and numbered prints with 50 Artist’s Proofs.

In addition to the artist’s signature, each print is co-autographed by General Johannes “Macki” Steinhoff, Kommodore of JG 7, scored 6 victories with a Me 262; Gottfried Fahrmann, Steinhoff’s wingman; Wlater Schuck Staffelkapitan of 3./JG 7 scored 8 victories with the Me 262 and is now 3rd ranked living ace of all time; Hermann Buchner claimed 12 victories in Me 262s.

The Painting: Because of the incredible speed of the Me 262, head-on attacks on bombers was not the normal tactic; however, it did happen. this scene is based on an incident when Major Rudi Sinner was III Gruppenkommandeur of JG 7 and a head-on attack on B-24’s from the 448th BG. Sinner shot down one B-24 and it collided with another bomber. This colorful machine was flown by the Gruppenkommandeur of III./JG 7. After experimentation with the WGr 21 cm rockets, they proved unsuccessful and were soon discarded.

In our quest to find new and exciting unpublished photos on aircraft, we combed Europe for new photos of Me 262s. The pickings are very slim. What a thrill to find this small, poor quality photo of this most interesting machine. Flown by the Gruppenkommandeur of the III Gruppe, it was photographed at the time when the WGr21 cm rockets were being tested, which did not work on the Me 262, but it makes an interesting variation.

There are no reviews yet.

Please note:At present we are unable to ship individual orders to Australia, the United Kingdom or China. To purchase our products visit your local hobby shop or book dealer. We apologize for this inconvenience. Dismiss